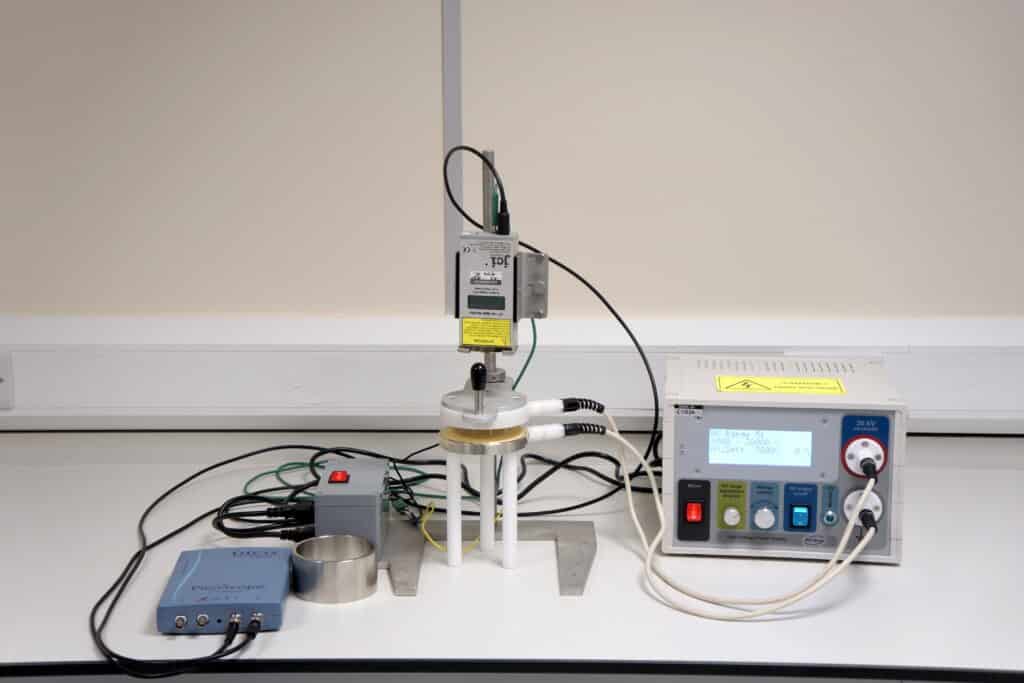 Test the potential for electrostatic discharge at your facility

Discover our range of tests

We offer a wide range of electrostatic testing services to ISO/IEC 17025:2017 standards, globally.
Discover our range of tests below and get in touch for a free consultation today.

The powder volume resistivity test is performed to establish the materials electrical conductivity, either conductive, static dissipative or insulating.

The test is conducted by passing predetermined voltage between two electrodes of known geometric size through the powder, under the specific test conditions. Generally direct resistance is measured, and the resistivity calculated using the following equation:

Many materials absorb atmospheric moisture or attract it to its particles surface. Addition or removal of this moisture often has a marked effect on the materials resistivity. Therefore, preconditioning and testing is performed under controlled relative humidity conditions of 25 (± 5) % and 23 (± 2) °C.

As per BS EN ISO / IEC 80079-20-2: 2016 Explosive atmospheres Part 20-2: Material characteristics – Combustible dusts test methods, powders may be grouped according to their resistivity as follows:

As per PD CLC TR 60079-32-1:2018 – Explosive atmospheres. Electrostatic hazards guidance, powders may be grouped according to their resistivity as follows:

In practical terms, during handling of bulk materials electrostatic charging normally occurs. The volume resistivity of a powder dictates how efficiently charge migrate through a material by electrical conduction. The higher the volume resistivity value, the more resistive the powder is. High resistivity powders will accumulate and retain charge presented to it in all situations. Low and most mid-range resistivity materials (conductive and static dissipative) will dissipate charge, providing it has a good path to earth.

This can be achieved by handling these powders in a well earthed environment (earthed conductive or static dissipative containers, silos, hoppers, and plant equipment). The build-up and retention of charge on a powder or equipment possess the biggest threat if the charge is suddenly released in the form of a spark discharge, which can cause an ignition of a flammable atmosphere. Therefore it is imperative to know and understand the electrostatic properties of your powders to ensure they are handled correctly to prevent discharges and potential ignition of flammable atmospheres.

The material to be tested is placed into an earthed stainless steel sample cup and using corona charging the sample is sprayed with a potential of approximately 10 kV. The charging plate is retracted, revealing the charged material to the field meter and the acquisition system is automatically initiated. The sample voltage is monitored and recorded by the electrostatic field meter, and voltage versus time is graphically displayed using the acquisition software connected to the field meter output.

Charge relaxation time or charge decay constant is a very good indication of a materials ability to self-dissipate static charge. A dissipative material will allow charge to migrate over its surface and/or through its volume in a time that is short compared to an insulating material, which will exhibit a long undesirable charge relaxation time. Surface resistivity indicates the ability to a material to allow charge to migrate across its surface. A material with a high surface resistivity would be considered to be insulating and therefore stop migration of charge. With a charging mechanism present, accumulation of potentially hazardous levels of charge may occur. A material with a low surface resistivity would be considered to be static dissipative or conductive and freely allow charge to migrate, therefore, providing it is adequately connected to earth, charge accumulation will not likely occur. Volume resistivity is a calculated value based upon the measured volume resistance using a test cell with known geometry. It is an inherent property of a material and is independent of sample size. Testing is conducted by applying a range of voltages from one electrode in intimate contact with the specimen’s surface and measuring either a current or direct resistance across the surface to a second electrode. The values of either measured or calculated resistance are equated with a cell constant, generated from the test cells geometric sizes and configuration and the tested materials thickness, to derive a volume resistivity value. The unit of volume resistivity is Ohm meters (Ωm).

Volume resistivity indicates the ability to a material to allow charge to migrate through its bulk. A material with a high volume resistivity would be considered to be insulating and therefore stop migration of charge. With a charging mechanism present, accumulation of potentially hazardous levels of charge may occur. A material with a low volume resistivity would be considered to be static dissipative or conductive and freely allow charge to migrate, therefore, providing it is adequately connected to earth, charge accumulation will not likely occur.

The following definitions are given as guidance by IEC 60079-32-1 “Explosive atmospheres – Part 32-1: Electrostatic hazards, guidance”. The test is conducted to establish whether a liquid will allow electrical charge to migrate through it or not and therefore its ability to accumulate and retain charge.

The liquid to be tested is slowly charged into a cylindrical, measuring test cell comprising of an inner pole and a concentric outer electrode. A voltage is applied, and current is measured from one electrode to the other. Using current value measured, a liquid conductivity is calculated using the test cells constant, determined from its geometry.

As per PD IEC/TS 60079-32-1:2018 – Explosive atmospheres. Electrostatic hazards guidance, liquids may be classified according to their conductivity as follows:

The level of charge accumulation in a particular liquid, and therefore the electrostatic hazard

that can be created, is strongly dependent upon its electrical conductivity and dielectric

constant (relative permittivity), εr. To describe the possible hazards and associated means of prevention, the conductivities of liquids have been classified as follows:

For liquids with a dielectric constant of around 2, (e.g. hydrocarbons), these classifications reduce to:

The upper border limit of medium conductivity remains at 10 000 pS/m.

The test allows for correct handling procedures to be established.  A material with a low conductivity would be considered insulating and therefore stop migration of charge. With a charging mechanism present, accumulation of potentially hazardous levels of charge may occur.

A material with a high conductivity would be considered static dissipative or conductive and freely allow charge to migrate, therefore, providing it is adequately connected to earth, charge accumulation will not likely occur. Charged material can in turn, through induction charging, charge local isolated conductors, which could present an ignition risk if located within a flammable atmosphere. i.e. electrically isolated personnel working in a potentially flammable atmosphere where the insulating liquid is either being handled or stored.

Conductive materials should equally be treated with caution and always be earthed. Discharges from the surface of a charged, isolated conductive liquid can easily cause ignition of head space vapours.

Can’t find the tests you need?

From the testing of a materials ignition sensitivity to explosion severity, Sigma-HSE is your single solution provider for a range of dust & powder flammability testing. Our dedicated team of experts are committed to helping you ensure and maintain compliance.

How to test the potential for
electrostatic discharge at your facility

Get in touch with one of our experts so we can learn more about your specific requirements. We’ll then generate a customised quote based on your requirements.

Prepare your samples and ship them to one of our global laboratories.

Once we’ve received your samples, we’ll begin testing and analysing. We’ll then create and send you a custom in-depth report with actionable insights.

If you need support after receiving your report, our after-sales support team will be on hand to assist you with any questions you may have.

Test the potential for electrostatic
discharge at your facility

Testing for the electrostatic potential of your facilities materials is an important
aspect of safety compliance. Learn more about how we can assist you today.

We use cookies on our website to give you the most relevant experience by remembering your preferences and repeat visits. By clicking “Accept All”, you consent to the use of ALL the cookies. However, you may visit "Cookie Settings" to provide a controlled consent.
Cookie SettingsAccept All
Manage consent

This website uses cookies to improve your experience while you navigate through the website. Out of these, the cookies that are categorized as necessary are stored on your browser as they are essential for the working of basic functionalities of the website. We also use third-party cookies that help us analyze and understand how you use this website. These cookies will be stored in your browser only with your consent. You also have the option to opt-out of these cookies. But opting out of some of these cookies may affect your browsing experience.
Necessary Always Enabled
Necessary cookies are absolutely essential for the website to function properly. These cookies ensure basic functionalities and security features of the website, anonymously.
Functional
Functional cookies help to perform certain functionalities like sharing the content of the website on social media platforms, collect feedbacks, and other third-party features.
Performance
Performance cookies are used to understand and analyze the key performance indexes of the website which helps in delivering a better user experience for the visitors.
Analytics
Analytical cookies are used to understand how visitors interact with the website. These cookies help provide information on metrics the number of visitors, bounce rate, traffic source, etc.
Advertisement
Advertisement cookies are used to provide visitors with relevant ads and marketing campaigns. These cookies track visitors across websites and collect information to provide customized ads.
Others
Other uncategorized cookies are those that are being analyzed and have not been classified into a category as yet.
SAVE & ACCEPT
Powered by